About Myself and My Work

Some background on myself, my career so far, and vector illustration for heraldic purposes 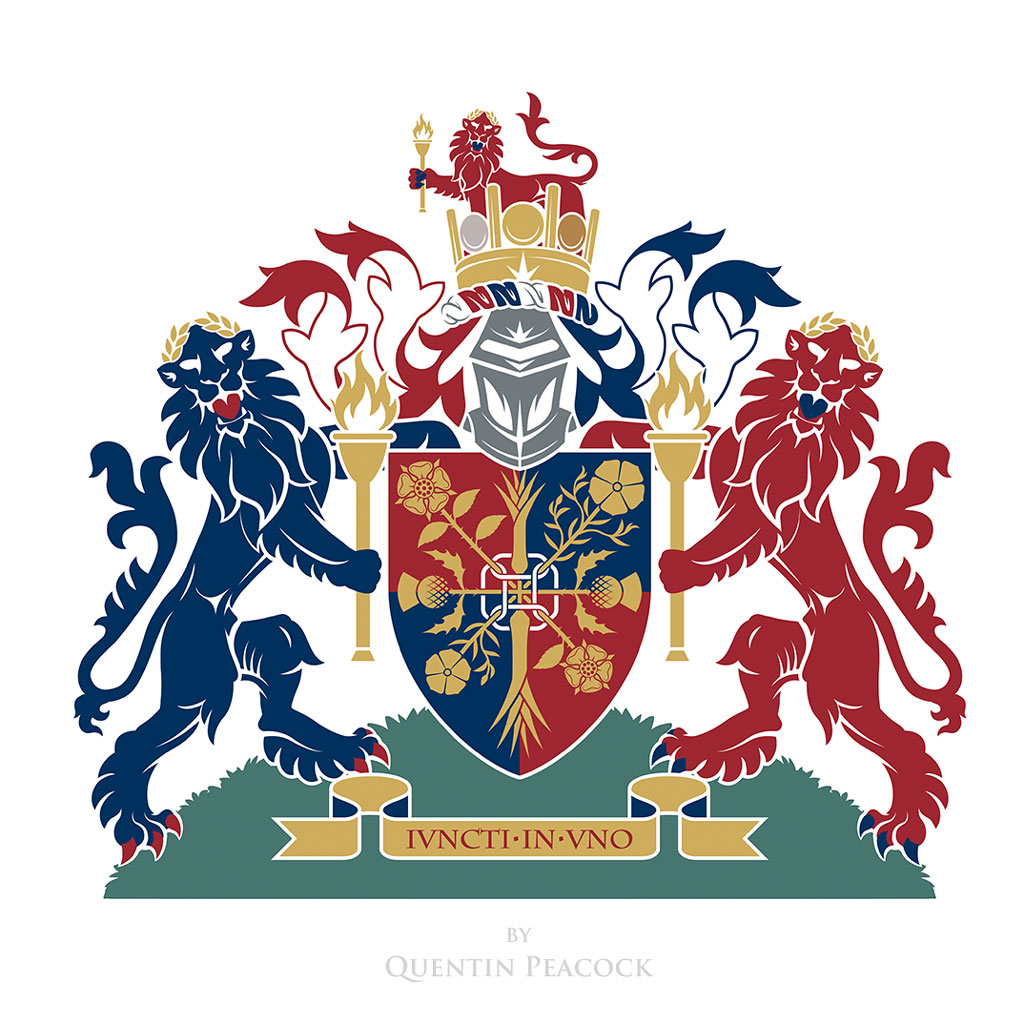 I have been illustrating professionally with vector graphics since I left Southampton Solent University in 1999 (or Southampton Institute of Art and Design as it was known then) where I studied Graphic Design and Illustration. I have always loved illustrating by hand. It has been a preoccupation of mine since I was very young, although I turned to digital illustration more and more during my professional career.

My working life has been spent mainly in the print industry working with various print processes on a wide range of projects. I have also worked in the digital industry, working for an award-winning design studio as well as some very popular computer games developers and even venturing into mobile apps.

I made the leap to work for myself in 2012 when I started QxDesign, and this gave me the creative freedom I craved to choose my own direction with projects and focus on the things that interest me most.

It was whist working as a Studio Manager in Cambridge that I had my first request to illustrate a family Coat of Arms. Little did I know what a large part of my life it would become. Needless to say, I very much enjoyed it!

Over the last several years I have worked on numerous heraldic commissions, many of which came through Heralds like Clive Cheesman and Peter O’Donoghue. It was with Clive that I had the opportunity to work on the most public of any work I have done, the Arms of the British Olympic Association, which was used by Team GB on their kit for the 2016 Rio Olympics. These were designed by Stella McCartney and produced by Adidas. I literally got to see my artwork up in lights for the launch in early 2016 and hope that there are more projects like this in the future!

It is really interesting to see some of the possibilities for applications of heraldry in various industries. Through heraldry I have been able to work on a range of projects that are inspired by heraldic art including an album cover for Sony Entertainment / Columbia Records, and the band, Train, computer games developers, sports teams and much more.

In 2017 I made a successful application to become a Craft Member of the Society of Heraldic Arts. It is a great honour to be included in a society with so many highly skilled artists, both traditional and digital.

It has always been my aim to demonstrate how beautiful heraldry can be when created digitally and even to look as if it has been hand painted. Digital heraldry will never (and neither should it) replace hand-created heraldic art, but we are in a digital age and the demand for professional digital heraldry is growing. It is my intention to make sure that this is done well and even to serve as an inspiration to other artists. All of my work is achieved through vector-based graphics which are a versatile and professional method of creating the highest quality files for printing and for use on screen.

My style has been heavily influenced by the resident artists at the College of Arms which is no surprise having developed my knowledge and techniques under the guidance of Clive Cheesman, the Richmond Herald.

View my portfolio for a collection of Arms, Crests, Bookplates and more

WHAT ARE VECTOR GRAPHICS?

2D digital artwork can be divided into two groups: Vector graphics and Raster graphics. Almost everybody nowadays are familiar with Raster graphics, these are pixel-based images and are also known as bitmap images.

Every Raster/Bitmap file will have a set resolution depending on purpose of the image or where it is used, these are measured in DPI or Dots Per Inch. Most photos, for example, are set to 300 dpi for the purpose of professional printing of marketing materials, posters etc. Images that are displayed on a screen are only 72 dpi, less than a quarter of a photo for printing, and this is because of a screens resolution itself as well as the fact that screens are in general held or viewed further away than physical printed material. The most popular raster file formats included JPEGs, TIFs, and PNG files - TIFs and PNG files also have the capability of having a transparent background if desired.

Vector files are not pixel-based, they are created using mapped points that are linked by straight or curved lines based upon mathematical equations. This may sound complicated (and Vectors are certainly tricky to master) but this eliminates the need of pixels altogether and has some very handy and this is why vector illustration lends itself perfectly to many types of illustration and logo design for example. Vectors have the ability to be scaled either by an illustrator, designer or print studio with no loss of image quality - this is unique to Vector graphics and makes them perfect for large scale posters and signage for example. Vector artwork is also a lot more editable than Raster artwork and allows the scaling of particular elements or colour editing with relative ease as long as the artwork has been set up correctly. Levels of detail can also be stripped from a Vector illustration, this allows the creation of versions of artwork for the use of flag making, jewellery, enamel work, and embroidery etc.

To the right (or below if you are viewing this on a mobile phone) you will see an example of the differences between Vector graphics (on the left) and Raster graphics (on the right) when they are scaled. For the purpose of this example I have used a 300 dpi JPEG image, which is considered photo/very high quality. Screen versions of the same image (at 72 dpi) would appear many times more pixelated than the version I have used.

Personally I use Adobe Illustrator as well as programs on my tablet for creating Vector artwork. Common Vector file formats are AI files (Adobe Illustrator specific), EPS files, SVG files and Vector graphics can also be saved as PDF files which are a lot more accessible (although they can also be used for Raster artwork).

Artwork libraries are created for every project and these contain Vector files as well as Raster graphics for use with both print and on screen.

A comparison between vector graphics and raster or bitmap artwork files. The vector examples are on the left hand side and the bitmap format on the right - the zoom percentages are in the bottom left of each image 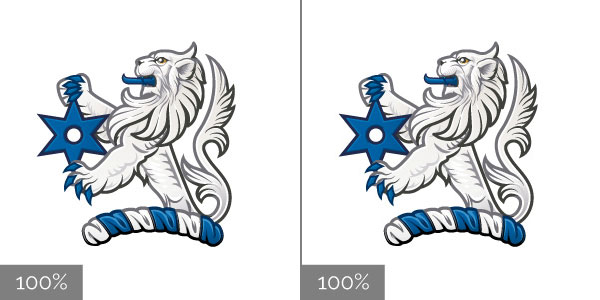 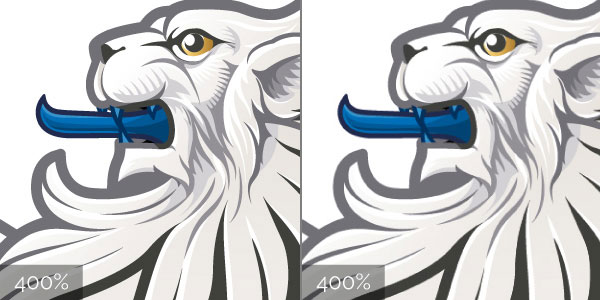 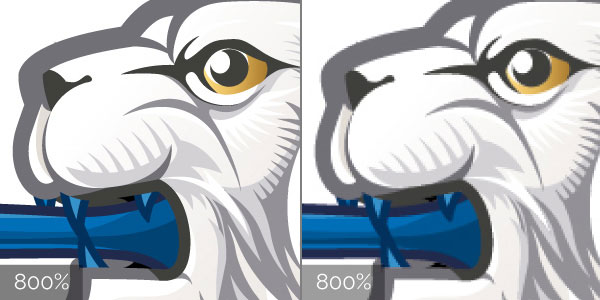 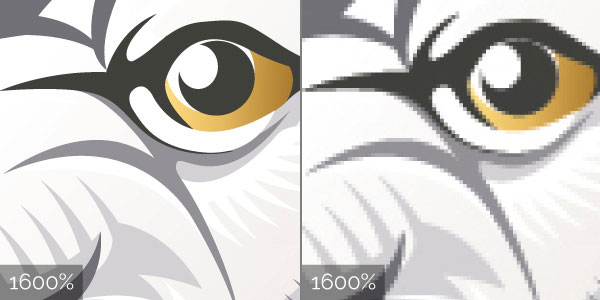